Lac Seul, near the town of Sioux Lookout, is one of those Ontario hotspots that I say warrants revisiting time and time again. For me, my stories began adding up many years ago when a good friend and lodge owner, Jim Hayes, made a move to Lac Seul and established beautiful Lost Island Lodge.

Size, depth, a plethora of prime rocky structures, lack of fishing pressure and a long history now of enforcing a slot limit…I’m talking about a lake that truly is a walleye factory. Smallmouth bass, muskie, and northern pike round out the species mix, but beyond fishing, it’s the overall Ontario experience I get there that keeps me coming back the most.

Lost Island Lodge is exactly that—a quaint, beautiful facility nestled onto a small island that’s only accessible by water. Towering pines, wildlife, and fresh clean air are abundant and all around. The food and service are top notch. Guests can utilize guides, can rent a boat, or bring their own to explore.

Certainly, my most recent walleye and smallmouth fishing trip there in September came about because of such success at Lac Seul in the past, but the story within the story of every trip I make to Lac Seul are the people there. You see, I have a long history with the Hayes family—classic three generation Ontario Lodge operators. Like their grandfather before them, sons Jim, Brad and Shane Hayes all became lodge owners. Ultimately, Brad guided for many years at Lac Seul while Jimmy owned the lodge. Later, when Jim and Brad retired, Lost Island Lodge came into the capable hands of the youngest brother Shane Hayes.

Well, anyway, during those early and on more recent trips made with them at Lac Seul, I watched young Sam Hayes (Shane’s son) grow from just a baby into a young man and phenomenal guide. As the third generation Hayes, there was no doubt from the very beginning that he would one day become heir-apparent to Lost Island Lodge.

I’ll always remember Sam as a young kid tooling around in a small boat around the docks, always wanting to go fishing and constantly asking me questions. He’d write me letters through his father, even before he was old enough to write. Naturally, because he was kin to some of my dearest friends, I always paid Sam special attention.

Since coming of age, Sam has filmed many shows with me—both on Lac Seul and the Clearwater/Pipestone Chain, where I originally fished with his uncles and where his grandfather operated his camp. He's had so much quality mentoring and his enthusiasm and love for sharing Lac Seul with visiting anglers are so clear that, now at the age of 27, I’d put Sam Hayes in the category of one of the best young fishing guides I know.

One last little story about Sam before I get to the particulars of last September’s outing. The first time we filmed together, Sam was about 14 or 15. He was just beginning to guide a little, and he had had yet to catch his first truly big walleye. Well, the first night we went, on film Sam caught his first 10-pounder! Then, after struggling a little about mounting it or not, in true Hayes fashion, ultimately, he decided to let her go. Since then, he’s guided clients to countless trophy walleyes, including two over 15 pounds on Lac Seul! And guess what? To this day he’s yet to mount a single fish.

Now back to my time spent in the boat with Sam this past September. We timed my trip for big walleyes, which we both obviously love. The chemistry between the two of us is fabulous because Sam is a very thoughtful hunter of fish, as I am. Consequently, we go about trying to find walleyes in similar fashion. Sharing a boat with him is almost like fishing with an extension of myself, because he’ll often offer a different perspective that’s similar to mine. Though it’s difficult for me to have such trust in another angler’s judgment, I’ve come to trust Sam’s perspective as much as my own. We work together as a team

In September, we expected to find walleyes on reefs and points—mainly along the deepest, steepest sides, which we did. Some structures were in current areas, while most were more main lake. Now by hunting for walleyes I mean we really took time to explore with our electronics to find fish, before taking the time to actually jig for them.

Here’s the only problem we faced. Prior to my arrival, Lac Seul went through four days of windy, severe cold front conditions so, needless to say, the big fish bite turned out to be slow. After making 30 - 40 mile runs by boat, we did find lots and lots of big walleyes. The problem? In all honesty, we couldn’t get a single one to bite! After experimenting with every presentation imaginable with 1/4 or 3/8 oz. Precision Jigs, it became clear that the big fish had a mighty bad case of lockjaw. We tried to force feed them any way we could. They were just in a terrible mood!

We definitely did find much big fish deeper than the 25 to 35-foot depths we primarily fished, but for fear of inflating their swim bladder and causing harm to those big walleyes, we opted not to target them.

So, I guess what can I say other than Sam and I set our standards very high.

Oh, but think about it like this. In only three days of fishing, we did catch over 200 walleyes, a bunch of nice pike and maybe a dozen and a half monstrous smallmouth bass averaging about 4.5 pounds! That’s an extremely impressive tally for any two anglers over such a short time. Normally, I’d expect a number of fish in that 6 to 10-pound range but, if you’ll forgive the cliché, I guess that’s why it’s called fishing.

Did Sam and I come away happy? Indeed, we did, because of the time we had to explore such amazing waters together while enjoying the long ties that bind us through his family’s history. Like I said, we just had a super bad case of high standers during a very tough fishing period. So, in all honesty, we both did come away with the full realization that we hadn’t scored on the trophy walleye Lac Seul typically produces.

Ya know, whenever I talk about fishing in Ontario, it’s always out of my lifetime of experiences there. And I think something far too unsung about visiting the province are lodge owners like the Hayes family. Generation after generation, they just keep doing everything right for their guests. They’re just good, down-to-earth people doing exceptionally well at what they love. To me of course, awesome fishing is half of what I look for, but the other is the people who make you feel like family that keeps luring me back. 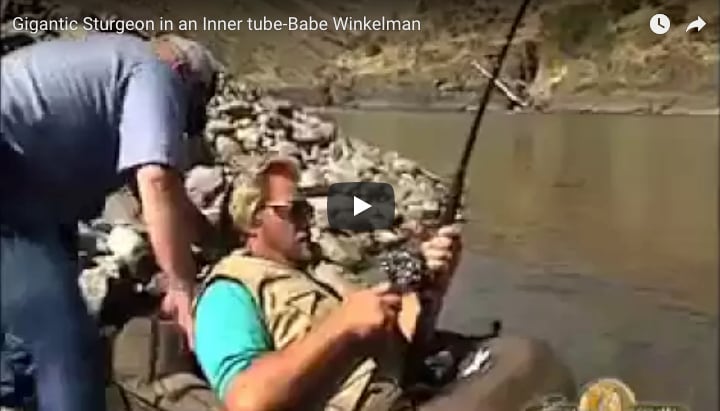 Babe Fishing for Gigantic Sturgeon in an ... 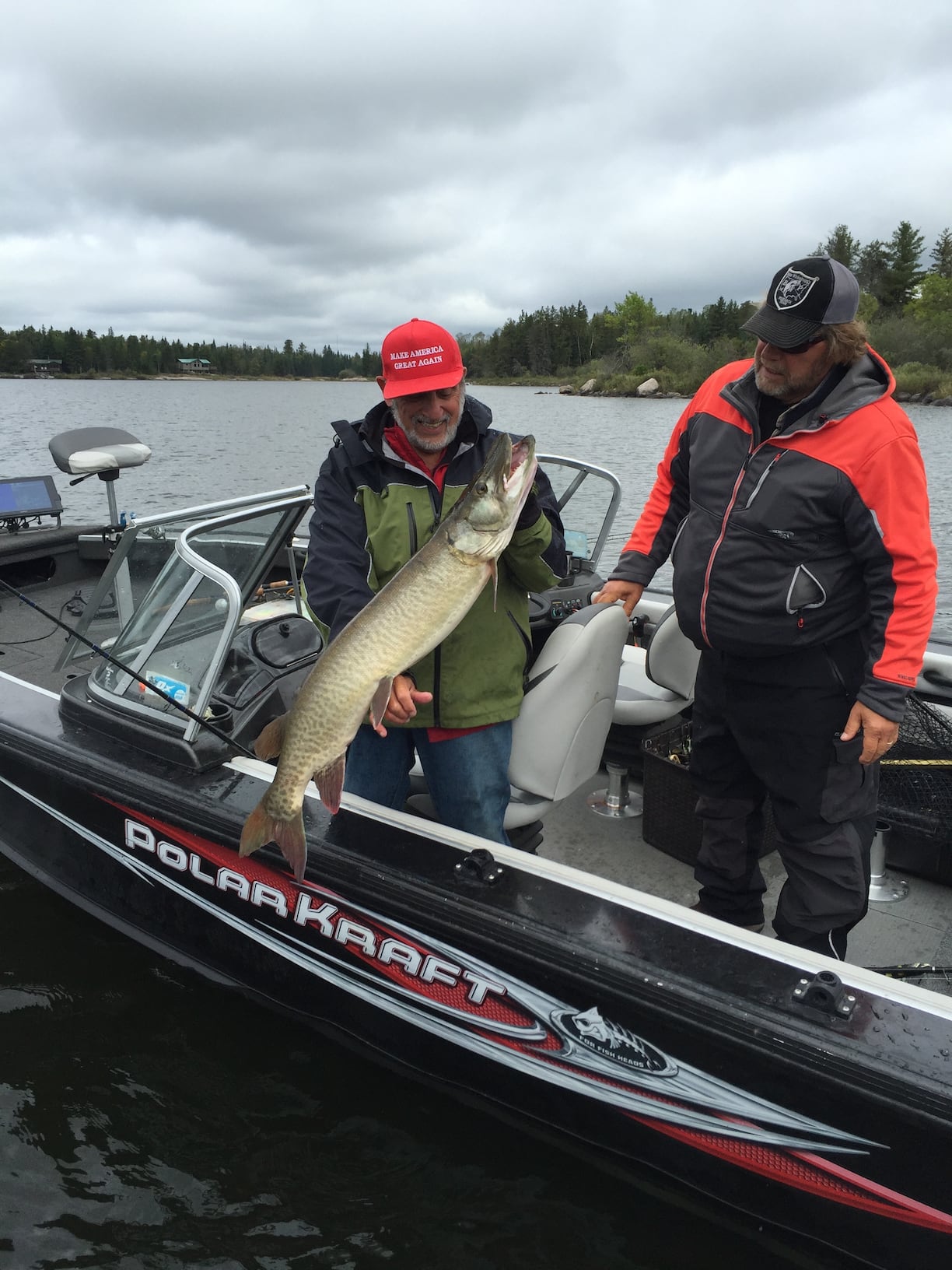