When you think of a hunting bucket list, what do you think of? A 200+ whitetail? A nontypical Mule Deer? Babe Winkelman pushes the limits with Arctic Musk Ox hunting. Along with Jerry Faust and Harry Fischer, some of his best friends, begins the bucket list adventure. All three men have Musk Ox tags, so it's an exciting quest for them as well. Weeks before this hunt took place, Babe had a bad accident. Puncturing his left lung and breaking multiple ribs, this trip was not expected to be easy. Only worth it.

Flying into camp, the guys were able to spot many herds of musk ox which only pumped them up more. They knew they weren't leaving without a big bull down. Babe was up first and it certainly didn't take long to find a big bull. During the spot and stalk, he had some trouble keeping up due to his injuries. Though difficult, nothing would stand in the way of him and his bucket list bull. With the herd grouped up on the beach, Babe got in position. Moments later, Babe took his very first Musk Ox. What an unbelievable few moments.

Being along with Babe on his hunt, Jerry couldn't wait for a crack at his own big bull. Again, it didn't take long for them to spot yet another huge bull. Quickly, Jerry Harry and the guides moved into position. They were able to watch the bull feed around at 150 yards before it turned towards them! The Musk Ox began closing distance quickly. Around 130 yards, Jerry pulled of a perfect shot. A great end to a thrilling hunt he had. Last but not least, Harry Fischer's turn came. 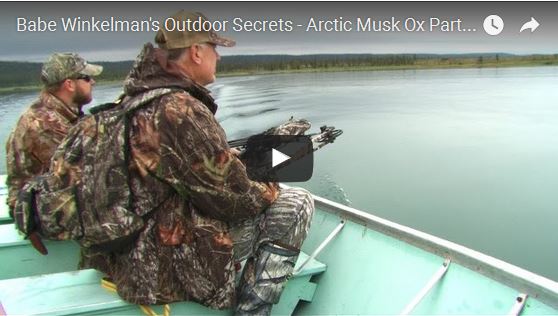